Why We Need To Get Rid of The Text Box Bid

These questions have become quite commonplace online; customers are asked to choose what they would like to pay, rather than are provided with a pre-set value. For instance, eBay allows customers to bid on listed items, whereas charity website Doctors Without Borders allows donors to enter a chosen donation amount.

Customers are prompted to indicate their chosen value either via an open-ended text box or a slider scale. With the recent boost in popularity of online transactions via mobile phones, organizations have increasingly turned to the use of slider scales rather than text boxes to register monetary values.

But how has this switch to sliders affected customers’ payments? Do payment responses differ for text boxes and slider scales? As it turns out; yes, they certainly do! 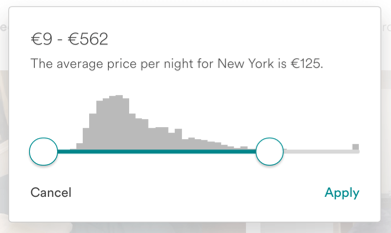 To understand the effect of a slider scale on customers’ payments, a variety of experiments were conducted.

A follow-up experiment demonstrated that the use of slider scales resulted in higher bids on laptops in auctions on eBay as well. Such bids were on average $10 higher per customer for the slider scale format as compared to a text box format.

Lastly, an experiment was conducted that looked into price range manipulation for wine bids. It was found that by extending the price range of sliders to higher values at the end-point, customers’ payments increased in value as well.

The Reason Why A Slider Scale Works

Let’s consider a customer’s decision to purchase a laptop on eBay. Based only on personal evaluation of its attractiveness they will be prompted to make a mental number line; is the price they are willing to pay for the laptop relatively low, medium, or high? And what are the values that represent such ranges?

In the case of a text box response, the consumer will consider the price they are willing to pay relative to the starting point of the response range only. In contrast, when people use slider scales, they evaluate values by considering visual distance from both the starting as well as end point of the response range. Imagine a wine auction for which the maximum possible bid is $800. Bidding $300 seems relatively low. Yet if there was no maximum value given, bidding $300 for an unfamiliar wine might sound like a lot instead.
To prove the effect of customer’s consideration of distance in payment decisions, the researchers looked into the effect of a non-sliding scale when compared to a sliding scale or text box format. They found that the non-sliding scale had a similar effect to the sliding scale, proving that it is the visual distance created by the scale that influences consumers’ choices for payments closer to the end point values.

How A Slider Scale May Boost Your Customers’ Payments

If your organization uses an ascending payment format, slider scale use instead of text box use could boost customers’ payments. Moreover, slider scale end-point values could be extended so as to increase payment values chosen by customers.

Retailers that auction products (such as eBay or WineBid), service providers (such as taxi services and restaurants), and charity organizations (such as Doctors Without Borders) would especially benefit from using slider scales with a wide response range.

It should be noted that aforementioned findings were all found for so-called ascending scales only; the starting value was always the lowest possible value rather than the highest possible value. Moreover, all prior experiments used a left-to-right slider.

This is why, in a follow-up experiment, the researchers looked into how customer payments would be affected in a descending scale format for either a text box, a left-to-right slider or a right-to-left slider. Participants were asked to make a bid for certain hotel rooms on the website Priceline.com, which is an online travel reservation company that allows customers to bid for hotel rooms.

Left-to-right or right-to-left sliders did not make any difference for customer payments. However, the results of the experiment did show that sliders were less effective than text boxes in the case of a descending scale, contrary to what was found for the ascending scales.

Thus, in the case of a descending payment format, such as those used on Priceline.com, it may be better to avoid slider scales instead.