Synchronicity. The one brain metric to rule them all?

Wat exactly makes communication ‘work’? And what does successful communication look like in the brain? The latest brain research shows it is not so much a matter of specific brain areas lighting up, but rather the degree to which multiple brains react in the same way.

Communication is what makes us human, as Yuval Noah Harari described in his book Sapiens (2014). For communication to be a successful exchange of information, it taps into a complex web of collective knowledge, abilities and social structures. Effective communication requires the translation of ideas from one person to another to take root (Hasson et al., 2004).

As a marketeer, we most certainly understand that effective communication is key. But how do you know your message is communicated correctly?

Neuroscientists have been long interested to study the parallels between people experiencing the same environment. They found that when seeing the same stimuli, their brain acted similarly, as if they were synchronized by the stimulus (Hasson et al., 2004). Several studies have proposed a neural measure to capture this similarity in brain activity (Nummenmaa et al., 2012).

What does synchronous brain activity mean in practice?

In addition, when participants are viewing a movie from a similar psychological perspective (for example all participants are empathizing with the same person in the movie), synchrony in brain activity between people increases (Nummenmaa et al., 2014). It is also shown that the degree of similarity across individuals’ brains might index the similarity of their emotional states. 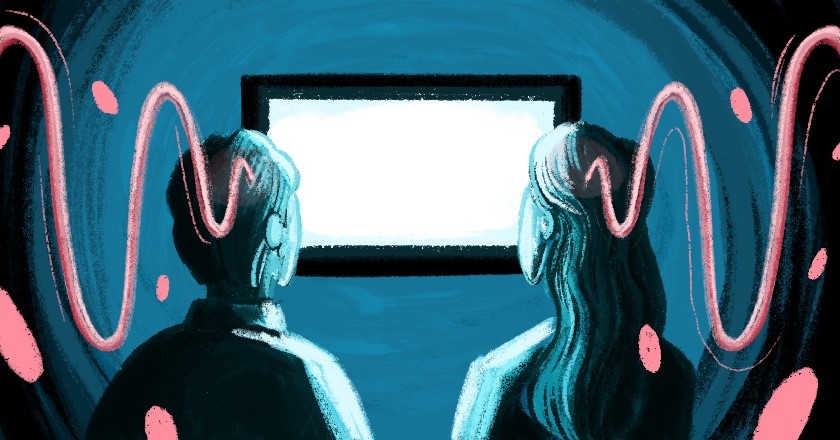 So, the research thus far indicates similarity in brain activity signals as the participants shared understanding of the stimulus. How can we use that in neuromarketing research? And does it predict anything about the actual effectiveness of the stimulus?

Several recent studies have used EEG (electroencephalography), which is a method to measure brain activity hundreds of times per second, to test the outcomes of brain similarity. It was found that the similarity in brain activity during a television show can predict buzz of that show on Twitter (Dmochowski et al., 2014). Studies using the brain activity synchrony on movie trailers, were able to predict future recall of the movie (Barnett and Cerf, 2017) as well as population level box-office revenue (Christoforou et al., 2017).

These promising findings prompted Unravel Research to develop the measure of neural synchrony themselves. Are we able to go beyond movie ticket predictions and predict the success of actual products in-store?

Unravel started with replicating the previous movie trailer studies. In two studies, each testing 16 film trailers on 30 participants, the researchers were able to strongly correlate the degree of similarity brain activity with the box office revenue at the opening weekend. The correlation of this single measure with sales was .69. When building a regression model which also includes movie budget, the researchers reached a prediction accuracy of 79.7%. That’s an offer you can’t refuse.

But does this also work when predicting sales for products? Unravel conducted a new study on how neural synchrony plays into the sales of food packaging. Why? It has been estimated that over 75% of food/drink purchase decisions are made at the point of sale (POPAI, 2014) where even 90% of consumers makes a purchase after only evaluating the front of the package (Urbany, Dickson, & Kalapurakal, 1996). Thus, compelling food packaging is essential when selling a product.

To test whether neural synchrony is predictive in the context of packaging, the team set up a study evaluating 16 product packages within the cookies category and compared them to the weekly in-store sales of that product. And guess what? A book indeed is judged by its cover: the similarity on the packaging was again correlated with the in-store sales of the product.

What’s in it for you?

As a marketeer, you’ll always want to know how well your message is transferred to the customer. Neural similarity seems extremely promising in this regard. Of course, we do not know what exact message ‘causes’ neural similarity, but we do have a better understanding of the ‘neural signature’ that is predictive of in-store sales.