How to use behavioral science to influence consumer decision-making

Every day, we make decisions between multiple choices and alternatives. After a while, our brains find shortcuts to help us make decisions faster, in a more “efficient” way. This is called fast-thinking, according to Daniel Kahneman, a behavioral economist and author of Thinking Fast and Slow. When we have more time to decide, we begin to refer to our memories and past experiences to make a final choice; this is considered slow-thinking.

The Influence of Stated and Revealed Preferences

A study on consumer preferences, published in the Journal of Economic Behavior and Organization, concluded that consumers are more responsive to other consumers’ revealed preferences, over stated preferences. I will highlight: this study was done by analyzing a dataset on the app-market, specifically about the ratings and downloads.

The study defined ‘revealed preferences’ as the downloading of an app and defined ‘stated preferences’ as the rating of an app. In the digital app environment where consumers have limited experience with an app and little interest in investing time, consumers will conclude with fast-thinking by relying on what choices others have made. This makes sense – because this goes back to our reptilian complex of survival.

In a behavioral neuroscience study by Donald Katz, one rat was given bitter raw cocoa. It was then socialized with another rat, which smelled the bitterness from the first rat. When the new rat was given the opportunity to choose between sweet and bitter food, he chose the latter. Why? Because of his social experience with a rat that smelled bitter, not sweet. He relied on another’s experience to help him trust which option would guarantee survival.

Now, I know we don’t sniff our friends to make a decision, but we do rely on others’ behaviour to confirm the ‘survival’ of choosing one option over another. In this sense, there is some truth to the study published on consumers’ stated and revealed preferences. However, our decisions are not always based on public dataset; data is just one piece of the puzzle.

There are more factors that come into play when people make decisions. We published a blog earlier that was based on a study form the Journal of Personality and Social Psychology that actually concluded the opposite: people are more influenced by the stated, rather than revealed preference. This study was done in a more real-life environment where participants interacted with an experimenter. The reason this study is more accurate is because it created a social context in which people are usually in when making choices in our day-to-day lives.

To wrap up these studies, we react to both preferences of choice and actions of others. However, depending on the time period and investment in which we have to decide, we rely on different sources. For instance, when thinking fast, we conclude quickly by other’s behaviour (or revealed preference). When thinking slow, we rely more on our resources (and friend’s choices) to reach a conclusion. 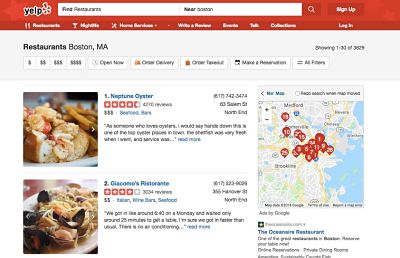 Translated into numbers, Yelp has reached an average of 74 million monthly desktop visitors, 72 million mobile web visitors and 32 million mobile app users, as of Q2 of 2018. However, Yelp doesn’t plan on stopping there – Yelp continues to improve the search experience for their users, providing insight from other users’ experiences. By offering data from both stated and revealed preferences of other users, Yelp allows users to choose a restaurant, whether they’re thinking fast or slow. By offering consumers the content they need to trigger a decision and supporting it with consumer data, Yelp continues to be a leading brand amongst review forums.