Emoticons in Customer Service: Why They Can Backfire And How To Use Them Right

Emoticons and emoji’s seem to be everywhere these days: In text messages from friends, in social media campaigns from major brands and even in e-mails from customer service representatives.

And that makes sense, right? They present an opportunity for companies to connect with their customers in a relatable and creative approach. Besides, according to a global survey conducted by Genesis; 40% of customers claim that the biggest improvement in customer service can be achieved through investing in a “better human service”. So why not use emoticons in customer service interactions in order to make them more human?

The Google search query for; “emoticons in marketing” has more than 7 million hits and you will find countless blogs and articles advising you on which emoticons to use for higher customer satisfaction, increased engagement and more sales. Unfortunately, most scientific research insights on the use of emoticons in customer service and marketing are inconsistent and contradictory.

To start you off with the first set of conflicting insights; A recent study at Penn University, showed that the use of emoji’s could increase customer satisfaction by 78% compared to using plain text. But a survey by YouGov found that 59% of people aged between 18 and 34 say that they perceive companies as “trying too hard” when using emoji’s in marketing campaigns.

So, what to do? Where to start? Do you even know the difference between emoji and emoticons? I certainly did not, a quick google search revealed the truth upon this mystery. Emoticons are old-school typed out in punctuation marks, whereas emoji’s are their updated counterpart: Icons, which can be anything from a smiley face to a pile of poo. It’s potato, potahto and tomato, tomahto: We are talking emotions, no matter whether they are typed like this :-) or displayed like this 😊.

Some Context and Facts

New research by Li, Chan, and Kim (2018) aimed to resolve those previously mentioned mixed findings. They hypothesized that emoticon users are often evaluated on two different dimensions: competence and warmth. Through laboratory and field experiments, they found that customers rate service employees who make use of emotions as more warm and pleasant but simultaneously perceive them as less competent than those who use plain text only.

Finally, Li, Chan, and Kim also proved that this effect is valid in two practically important service situations that can make a certain type of relationship norm more salient: negative unsatisfactory services and positive additional services provided by the service employee. In the negative circumstances, emoticons made the situation even worse and decreased customer satisfaction, because it triggered primarily exchange norms and made customers focus on competence instead of warmth. In the positive circumstances, emoticons had a positive effect on customer satisfaction, because communal norms were more salient and lead customers to focus more on warmth than competence.

Domino’s Pizza may provide us with insights into the biggest success story when it comes to applying emoji’s in marketing communication. Domino’s does a great job inducing a more communal environment on social media, in order so that their customers interpret the emoticons in terms of higher warmth rather than lower competence. After the introduction of ‘emoji ordering’, dominoes changed the game of pizza delivery services completely. ‘Emoji ordering’ allows customers to order a pizza through tweeting or texting a pizza emoji to Domino’s. Resulting in a nice fresh pizza delivered to your doorstep in under 30 minutes.

Another great example of using emoticons in pop culture is that of Hilary Clinton. Back in 2016 during her presidential campaign, Hilary introduced the Hillarymoji app containing over 30 emoticons, stickers, and GIFs, which could be used in conversations on WhatsApp and Facebook Messenger. The brand Hillary Clinton benefited from the engagement and exposure, but keeping recent research insights in mind, one might wonder whether triggering the dimension warmth instead of competence was a smart move for Hillary. 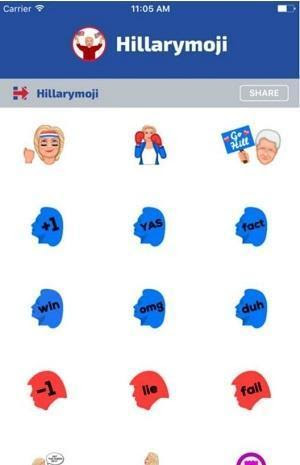 When you think of investment banking, you don’t usually associate it with warmth and communal norms, but rather of competence and transactional business. Therefore it shouldn’t be a surprise that Goldman Sachs mainly got negative attention as a reaction to this tweet in 2015: