Are Chatbots Catching Up To Human Salesmen?

Most likely, you'll recognize that vague feeling when talking to a customer support chat service, that the "person" you're chatting with might actually be a computer.

Indeed, the market size of chatbots is expanding: starting at $250 million in 2017, it will be more than $1.34 billion in 2024 (Pise, 2018). A chatbot is an automated speech generator that can respond to both written and auditory text. More than 21% of US adults and even more than 80% of generation Z (born between 1996 and 2010) use voice/text bots for information search and shopping.

Almost every week, a new chatbot application is released. Only at the start of may Facebook launched a new chatbot that claims to be superior in demonstrating empathy, knowledge, and personality. It was trained on 1.5 billion human conversations to make it as human as possible. Facebook now claims 'Blender' to be better than Google's latest chatbot Meena, who was released last January.

Other examples are plenty: two years ago, Google introduced Duplex, a system that can call hairdressers and restaurants to make a reservation for you. Domino's Pizza uses chatbots to take your orders. KLM created Blue Bot, which helps KLM travellers to find travel destinations, book flights, and pack their bags. It will even suggest you to bring an umbrella when the weather is terrible at your destination!

Applying the functionality can fulfil your business goals. HelloFresh's Freddy, for example, is a Facebook messenger chatbot that helps customers to find a recipe and order the ingredients. This chatbot helped HelloFresh to reduce their Facebook response time by 76%!

And not only for pure business: the World Health Organisation created a chatbot to reduce misinformation about the coronavirus. Automatic chatting is also used for mental health (Bendig, Erb, Schulze-Thuesing, & Baumeister, 2019) and for diabetes: the Lark bot engages users with a kind and humorous persona that monitors health data and utilizes that to stimulate healthy behaviours. Clearly chatbots are everywhere, but can they also be used by marketers to increase sales?

Use chatbots for sales?

Speech recognition and language processing of modern artificial intelligence (AI) technologies get more and more sophisticated. It enables the system to 'understand' complex, and subtle dialogs, and address consumer requests with depth, compassion, and even humour.

A recent study by Luo, Tong, Fang, and Qu set out to evaluate the customer experience with an AI-empowered chatbot at a major internet-based financial service company in Asia.

The chatbot was trained with the company's call centre voice data and passed the Turing-test successfully: 97% of its customers did not recognize speaking to a machine over the phone. The chatbot had a female voice with optimized pitch, tone, speed, and intonation.

The sales situation tested in this company was as follows: borrowers with a high credit score that had successfully repaid their loans in the past 11 months (of the 12 monthly instalments) were called to sell a loan renewal. In order to boost sales, the service agents informed the customer about a special promotional offer that was valid for 24-hour limited-time.

Undercover computers are as good as experts

The results from this study were twofold:

The purchase rates for all conditions are summarised in the figure below. It shows that underdogs sell as bad as AI chatbots that are exposed before the conversation. Note, all call attempts are included in this number, while more than 56% hang up the phone after chatbot disclosure. Even so, after correcting for hang-up, the purchase rate was still low for exposed chatbots. On the contrary, when chatbots’ identity was not revealed, purchase rate was almost the same as proficient workers! The same holds for disclosure after the purchase decision was made. Most notably, disclosure at the end of the conversation, scored worse. 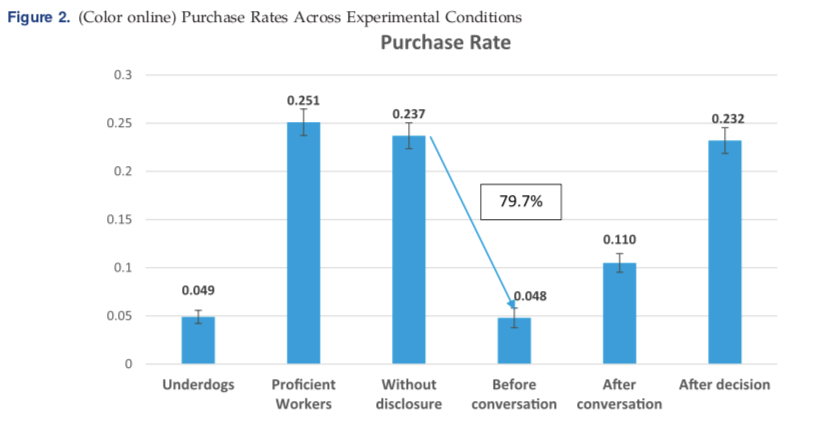 Call length seems to be an important factor in sales, as both underdogs and chatbot with disclosure before conversation had a smaller average length of call. It might be that using a chatbot without the customer knowing, might not be in harmony with your business value or customer trust. In that case, revealing that the sales call was done with a chatbot is best to do after the decision was made.